In a word, First Fridays Florence was amazing, considering that an unfavorable early forecast gave way to partly sunny skies 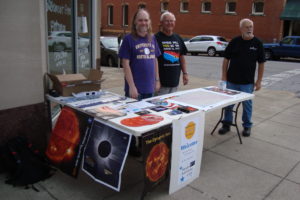 and incredible evening temperatures on Friday. But what really made the event was the overwhelming response from the community, as people oftentimes surrounded the tables.  The lure of free eclipse shades was definitely there, considering recent media stories about unsafe glasses that fueled many of their questions.  Not only did we clear the original stock provided by NASA’s Night Sky Network, but Dr. Mel Blake made a trip for more shades provided by the University of North Alabama.

But it wasn’t just the eclipse shades that drew peoples’ attention.  They wanted to know about travel plans, or how safe it would be to observe from the Tennessee Valley.  Many were pleased to learn they could see the sun through their shades at that very moment, and became delighted to safely observe the sun as the star it is.

The weather would eventually wreak havoc.  Late in the evening, a smattering of raindrops signaled a swift removal of printed material that lay on the tables, and it wasn’t much longer before a rainstorm unleashed itself on the downtown festivities. 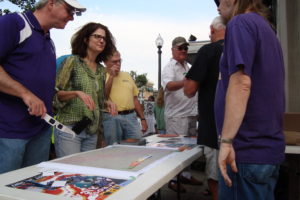 Despite the rain, we tallied over 400 visitors and gave away more than 500 pairs of eclipse shades.  Both numbers were higher than July’s event!

Whether we have personally waited on the arrival for months, weeks or years no longer matters. The eclipse is upon us.  Our lists had better be completed soon, because all that’s left is the forecast.  The public is gearing up for the show of a lifetime.

We hope that everyone who observes the eclipse, whether in partiality or totality, does so safely and prolongs their connection to the knowable mechanics involved in this rare and unique celestial event.  The only other warning may be an eclipse’s capacity (even a partial one) to drive curiosity and awe in raw, unexplored emotion.  “On a scale of one to ten,” says noted eclipse scientist Fred Espenak, “a total eclipse is ten million. It can’t be compared to anything else.”