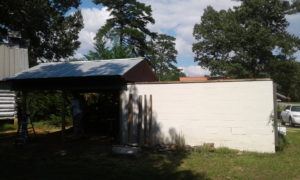 For the first time in many years, sunlight bathed the whole interior of LaGrange Observatory on Saturday, as its roof gracefully rolled open once more.  The picture in this paragraph doesn’t properly show the success, thanks to a late-afternoon shadow creeping across the project, but the first goal has been accomplished at LaGrange Mountain.

The task for Saturday was to attach two 4×4 pressure-treated posts to the observatory walls with concrete anchors, in line with the posts that were set a few weeks ago.  Next, the rails and top plates were attached between the post-tops (and set through the existing threaded rods), followed by a crosspiece between the northernmost posts for lateral stability.  The lumber was set in place with deck fasteners.

The roof stayed on the rail path during the incipient roll-off, although some resonant flexing was noticed on the 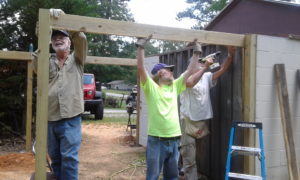 rails while the roof was in motion.  This was quickly solved when the crosspiece shored up the 4×6 posts.  The roof rolled back straight and true, with the overhang neatly gliding by the rails at a distance of 1/2 inch on both sides.

Mike Worthy, the de facto construction lead on the project, and L. C. Lenz with the LLHA kept in touch on the materials list. During his daily travels, Mr. Lenz also found and installed a metal door.  It provided a pleasant 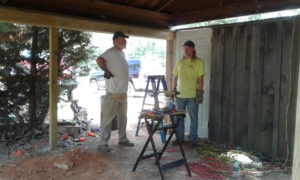 finishing touch.  A roll-off roof is an unusual structure, given that it seemingly suspends a very heavy object in mid-air.  Because of this awareness, I am grateful for the engineering attention that Mr. Worthy paid on the project.

Mel Blake and Scott Aldridge lent their services on Saturday, eagerly helping in every way possible.  So far, the total outlay has been $220, not including donated material or cartage.  We still have $180 available, which should go toward the Phase I Punch List.  The most acute needs are weatherproofing the door, replacing the roof latches, security markers and marking tape (which I’ll try to get donated), and completing the top plate track system. 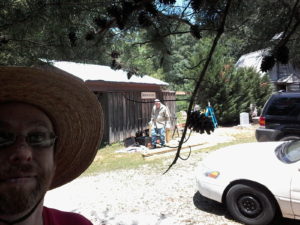 ociety members, and will begin its cleanup process.  This coincides with the end of Phase I construction, so we will have some topics to discuss as a club at our June 29th regular meeting, including sharing any best practices to refurbish, curate and memorialize the telescope for permanent display.

And please remember to put Saturday, July 15th on your calendar, because we’re having our annual club picnic dinner at LaGrange Mountain so all of our members can see the changes!  Telescopes are welcome, for if the weather allows, we’re rolling off the roof…