The Legacy of Harrison Schmitt 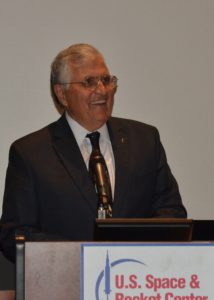 “What size were the boots you wore on the Apollo mission?”

Many minutes into the Q&A that followed Thursday’s presentation given by Dr. Harrison Schmitt, someone asked him to recall the strangest question asked of him after the Apollo 17 mission.  He easily recalled his flat, unambiguous response: “I have no idea!”

The audience in the National Geographic Theater at the U. S. Space & Rocket Center were treated to many of Schmitt’s stories and recollections of spaceflight. A trained geologist (making him a member of astronaut Group 4), Schmitt had also been tapped to learn the descent and launch of the mission’s lunar module Challenger — while having had no previous flight experience.

His storytelling expertly recalled the mysterious orange-colored soil found at the mouth of Shorty Crater, how regolith is more difficult to walk in once it’s been disturbed, and how he would always remember the utterly black skies of lunar daytime.  His description of a specially-built pair of “jumper cables” (created as a last resort if the ascent module’s ignition system failed) made for nervous laughter in the 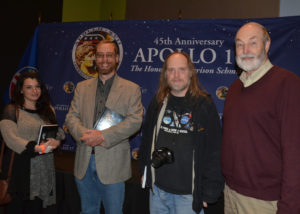 audience, since none in attendance expected such a Plan Z type of narrative.  Yet Schmitt also offered lots of praise toward the engineers that considered innumerable contingencies and “what if” moments that could occur, from their liftoff after midnight on December 7, 1972, to splashdown 12 days later (in case you were wondering, the igniters worked the first time).

This presentation and booksigning were scheduled to commemorate the 45th anniversary of the mission, and Schmitt used the moment to acknowledge the challenges for a long-term mission to Mars.  He repeatedly pointed to young people in attendance, petitioning them to learn science and engineering.  He also stridently supports the idea of using helium-3 as an energy source, and his 2006 book, Return to the Moon, created a plaintive case for exploiting its properties if humans were to colonize our nearest neighbor.

The most striking thing about Dr. Schmitt was his own energy.  Apollo 17 was his only spaceflight, but his ebullience about long-term manned missions is still buoyed to this day by the experience, and I’m glad to have heard his stories about it.