I wove my way around the hilly terrain outside of Savannah, enjoying the late year warmth, forgiving the drought for at least one more evening. There was enough daylight to become familiar with the terrain: a gentle slope on the land, surrounded on all sides by forest, and lots of beehives nearby.  The forecast for clear skies was incredibly spot on, as everyone patiently waited for astronomical twilight to yield utterly clear skies. 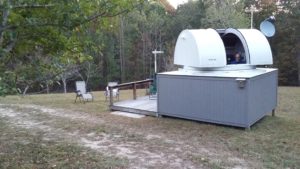 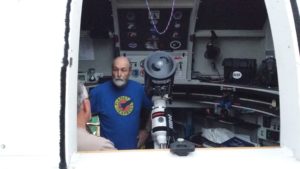 And they were nearly perfect.  With only a tinge of sky glow coming from Pickwick, a crystalline canopy could be found in every other direction.  Mike expressed dismay over his telescope’s mount, but I found no fault in it.  Every selection we made in Stellarium appeared right in the eyepiece, with only a minimal amount of added slewing!  This was my first time to drive a scope from the famous free software, and it was quite addicting.  Even low-lying NGC 253 appeared in our field of view, but late atmospheric moisture began chewing up the firmament, and turning this magnificent galaxy into a mere smudge.

We followed several objects throughout the evening; three of the four gas giant planets and early-setting nebulae near the galactic central point.  We even vainly tried to find the recent nova near Sagittarius!, but spotted serveral open clusters as we jumped from object to object.  We observed the Veil Nebula and NGC 6811, then drove westward to Andromeda, the Double Cluster, Triangulum.  We looked into the nebulosity of the Pleiades, and did some literal star-gazing at Hamal and Mesarthim in Aries.

I’d like to say a huge thank you to Mike Worthy and Shirley Murphy for the coffee, chow and chatter.  We delighted in their hospitality and the pastoral retreat of their home, and the sky’s magnificence also warmed our hearts.