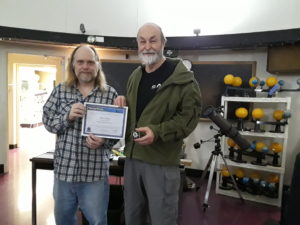 Brand marketing uses the term “relatable” to convey a product’s allure to the public. Amateur astronomy’s “product”, for lack of a better term, is an elusive clear sky unencumbered by light pollution; a difficult thing to find within city limits on select nights.  Couple that with cultural disconnects about stellar composition, the immensity of the cosmos, or perhaps another unlisted reason, and it’s not difficult to understand why astronomy doesn’t get a lot of airplay.  But that’s what we’re doing at First Fridays.  How do the objects people see in telescopes relate back to humanity?

As it turns out, public eyepiece time has afforded us some great teaching tools by NASA’s Night Sky Network.  Those tools were given to Shoals Astronomy Club because of the many, many hours we logged in public outreach.  This wasn’t just prior to the eclipse, but for other First Fridays Florence events, and also for the civic refurbishment of the LaGrange Observatory.  Every bit of that time counted recently, when six of our club members received certificates from the Night Sky Network for their contributions to public outreach.

At our February 22nd meeting, six certificates and pins were handed out in recognition to volunteers that helped to bring the cosmos a little closer to humanity. The NSN awards went to Scott Aldridge, Mel Blake, Jon Cesar, Eric Geater, Rocky Stone and Mike Worthy.

In addition to these certificates, Mike Worthy became the first member to complete the Astronomical League Binocular Messier program, and he was awarded a certificate and pin for this accomplishment.  Congratulations, Mike!