The Meade LightBridge At LaGrange

The LaGrange Observatory is truly an observatory once more.

Sunday’s first order of business was to remove the hand-built telescope from service.  Built nearly sixty years ago, the instrument 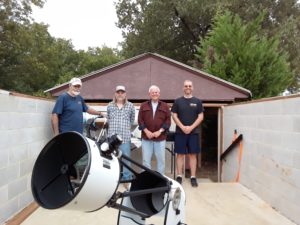 had been used for years to educate the public about night skies.  In time’s irrevocable march, the scope and its cinder-block home were eventually abandoned.  During last year’s restoration project, it was determined that both scope and pedestal would be preserved.

At the mount now rests a Meade LightBridge.  The circular area of its 12 inch mirror is nearly three times larger than its predecessor, and the focuser accepts different sized eyepieces.  The Meade’s finish is unspoiled and dazzling.  Once we became oriented in the process, we became giddy as schoolchildren to watch the mirrors fall into precise alignment during collimation.  It truly was an exciting day to install and ready this new instrument for the skies.

To commemorate this moment, Shoals Astronomy Club will host a First Light Night on Saturday, November 10th.  At 4 p.m., the public is invited to the observatory to see the new telescope.  We’ll have coffee available and tell a few stories about amateur astronomy as we patiently wait for twilight.  Then we will point it skyward, and one person in our group will be selected to enjoy its first light.  After that, the amateur astronomers in attendance will curate a tour of the night sky.

If skies are cloudy, we will host the First Light night without any observing.  If it is raining, the event will be postponed.

If you have questions about this event, please send an email to shoalsastro@gmail.com or call Eric Geater at 731-431-3742.